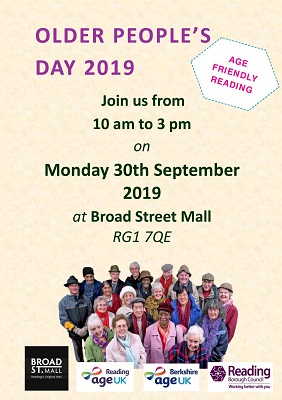 The event takes place from 10am to 3pm on the ground floor central lobby, where we’ll be joining lots of other local organisations in showing our support for older people and their carers. It’s a great event for anyone who wants to know more about the range of social activities and support services available to older people in the Reading area.

Our solicitors will be there to offer advice on a wide range of legal services, from making a will and drafting a Lasting Power of Attorney to estate planning and how to fund your care in later life. We’re always happy to help, so if you have any questions about legal matters you’d like to get sorted out, please come and see us!

Our Rowberry Morris team are looking forward to the Reading Legal Walk, a 10km after work walk that raises funds for legal advice agencies in Reading and the Thames Valley.

The Rowberry Morris team have a just giving page which can be found at https://uk.virginmoneygiving.com/RowberryMorris19. All contributions gratefully received! 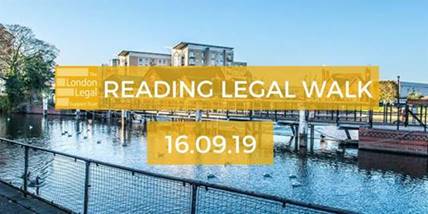 Rowberry Morris are delighted to be taking part in the 2019 Reading Legal Walk on 16th September 2019 in aid of free legal advice centres in Reading and the Thames Valley.

Last year's Staines 10k took place on Sunday 13th May 2018. Rowberry Morris were once again proud to sponsor this event - and very pleased that some of our team pulled on their running shoes to take part.

This fast, flat, 10k is becoming a favourite in the running calendar, and the 2018 event was no exception.

Organised by Spelthorne Borough Council, Runymede Runners and Staines Strollers not only provides an opportunity for healthy competition, it also supports local charities, which benefit from the proceeds.

Anna Illingworth, Liam Connolly, Helen Greenwood, Nick Gething, Sarah Moon, Abi Kabutey and Sam Edginton were all running from Rowberry Morris, along with a few of their family and friends. As well as the physical challenge of running 10k, the group used this as an opportunity to raise money for a local Staines charity, Spelthorne Rentstart.

Spelthorne Rentstart is a charity established to assist single people and childless couples to access accommodation in the private rented sector. Since their beginnings in 1997, they have helped well over a thousand people in need.

Homeless is often associated with inner city areas, but it can be just as common in suburban areas like Spelthorne. Personal tragedy or a sudden change in circumstances like redundancy or family breakdown can strike anyone at any time. For people who fall outside the welfare safety net there is often nowhere else to turn. Spelthorne Restart works in the Spelthorne borough to help clients get a roof over their heads during these difficult times when they might otherwise find themselves homeless. The charity also tries to ensure tenants have the best chance of maintaining a trouble free tenancy by offering ongoing tenancy support services for the duration of the lease.

Based in Staines, Spelthorne Rentstart is run by a committed team of permanent and volunteer staff. The team build key relationships with local landlords, estate agents, Spelthorne Council, Citizens Advice Bureau, Housing Associations, Hostels and other charities to ensure the best possible outcome for their clients.

For more information about the work of Spelthorne Rentstart, please have a look at their website.

A great fundraising effort for Naomi House and Jack's Place! 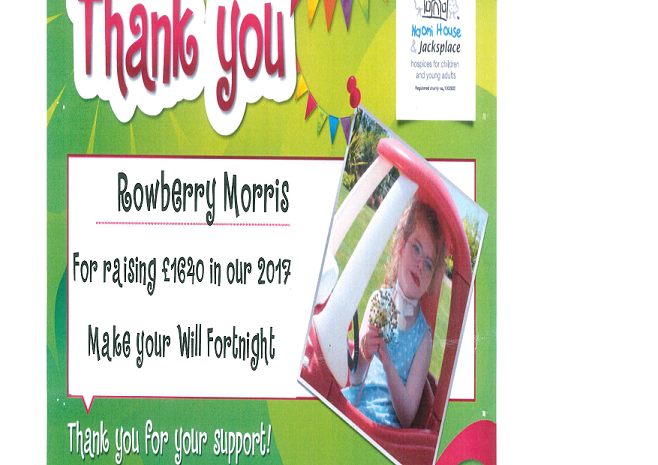 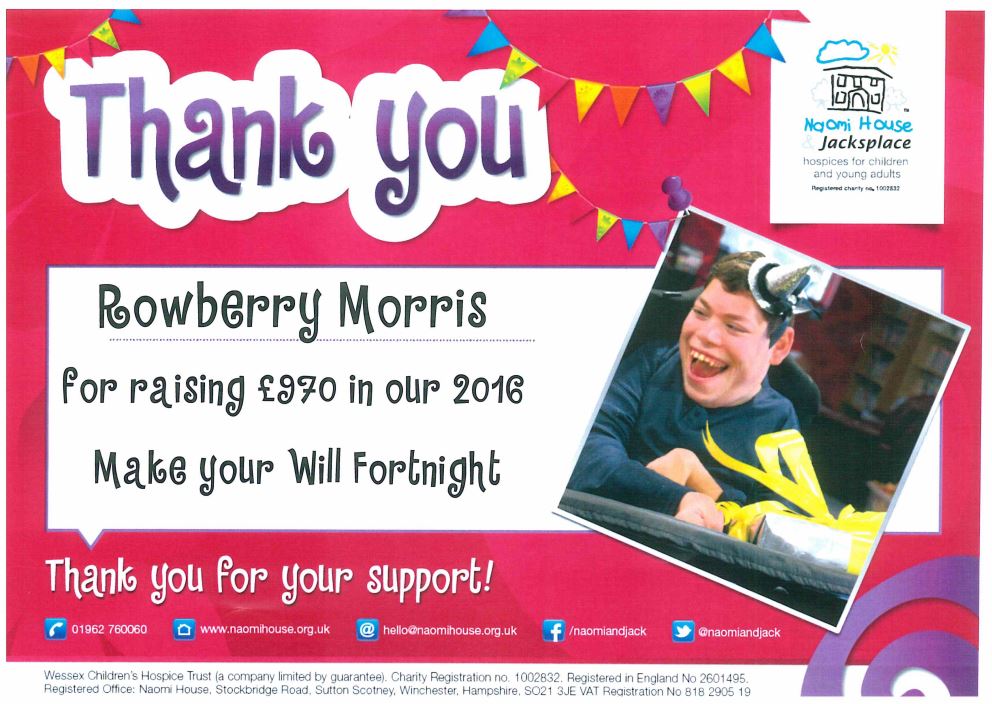 A walk in the park! 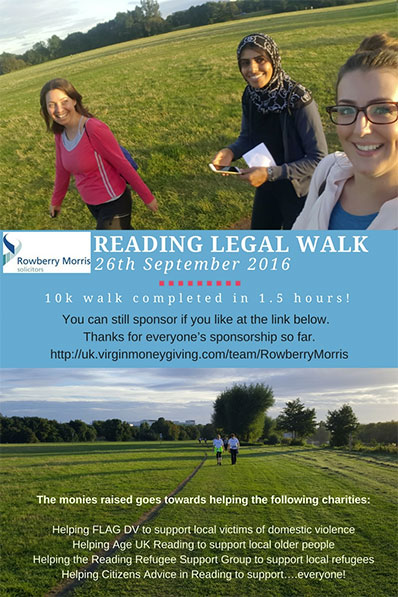 Click on the posters to purchase tickets for the Oktoberfest and/or book your place at the Carers' seminar. 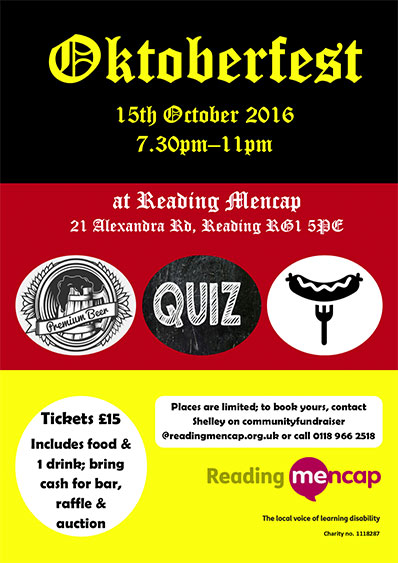 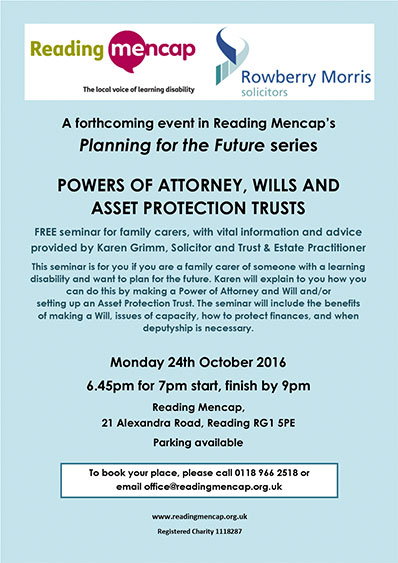 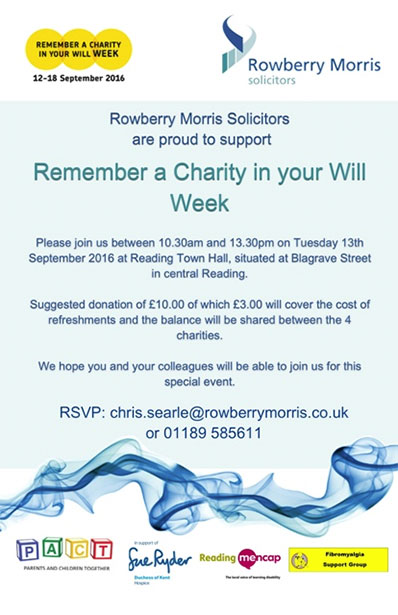 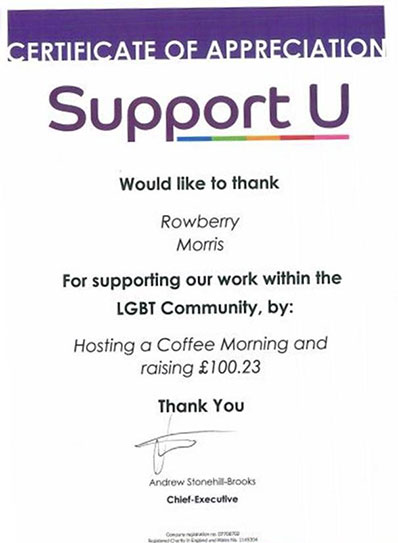 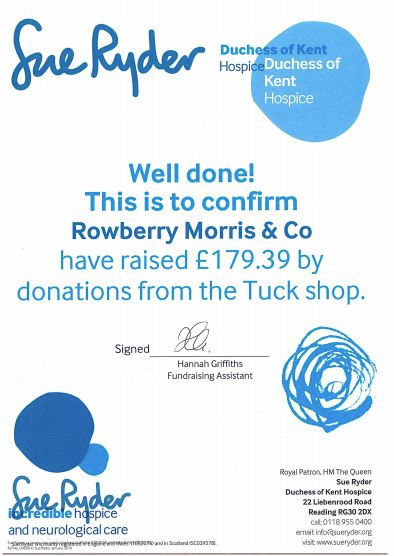 Rowberry Morris Staines Office entered the ‘THE DUCKRACE’ on SUNDAY 26th JUNE.  Well done everyone and thanks to all those who took part. We look forward to next year’s event. 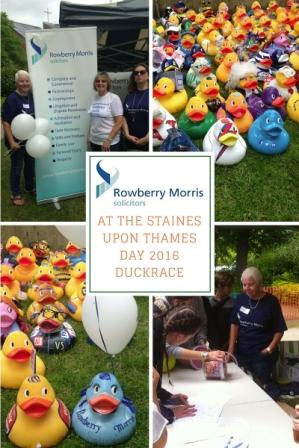 Women V Cancer Ride the Night is the biggest women only cycling event in the UK, and the thousands of women that take part are raising crucial funds for Ovarian Cancer Action as well as Breast Cancer Care and Jo’s Cervical Cancer Trust.  Now in its third year, the aim of Women V Cancer is to help raise funds for these three charities, raise awareness of the cancers and get more women cycling!

On Saturday 28th May 2016 I am leaving Royal Windsor Race Course at 9pm, following a 100km route into central London past many famous landmarks including Westminster Abbey, Trafalgar Square and Buckingham Palace and back to the Racecourse.  To make sure we can’t be missed, there is a lot of pink and plenty of fairy lights to be seen.

I’m out training nearly every day covering about 70km each week, building this up before the big ride.

My mum died of cancer 16 years ago and since I have friends who have also been impacted by this disease and I’ve seen the impact it has on those who love and care for them.  This is my small way to give to all women that are battling cancer.

This year we are being joined by Rachel Riley and Susie Dent from Countdown. 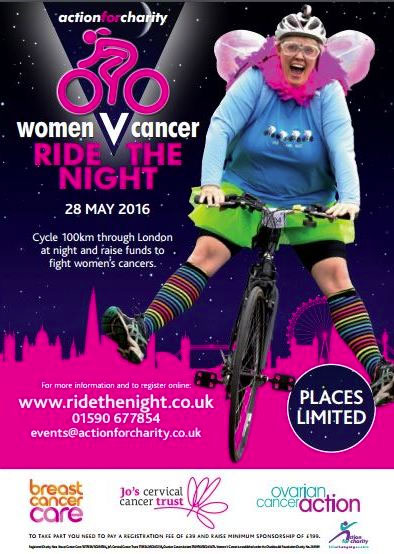 Ovens at the ready, it's time for Sue Ryder's Duchess of Kent Cake Off 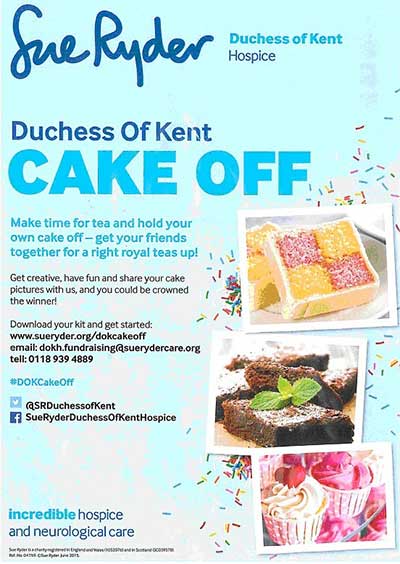 The MidasPlus Duck Races return, once again, to the Staines-upon-Thames Day with the infamous BIG Duck Race and the small duck race starting at the Two Rivers Pub on Church Street on the River Colne and finishing on the River Thames at the Memorial Gardens.  To enter see the Big Duck Race Page

Look out for our Rowberry Morris Duck - ‘Lola’ 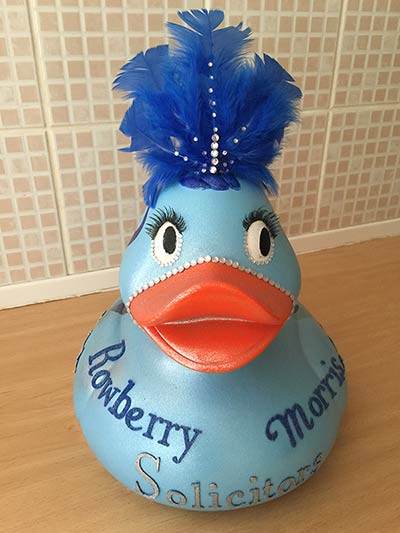 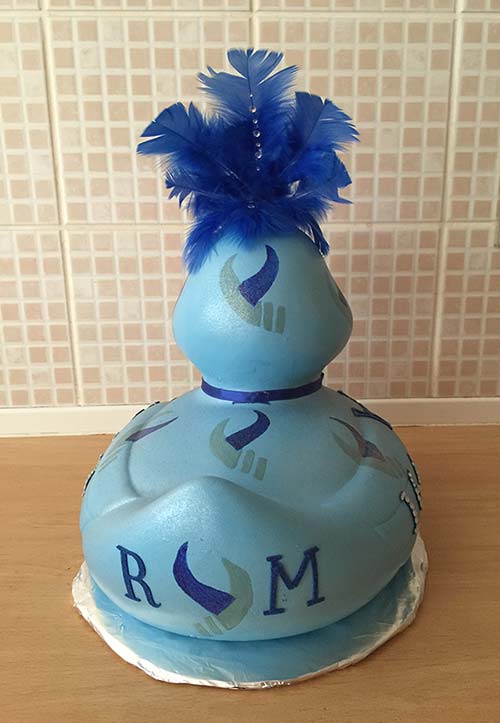 Rowberry Morris was proud to support the Charity Coffee Morning with the Mayor of Reading and SupportU held on Tuesday 23rd June 2015 at the SupportU office in Castle Street, Reading.  More…. 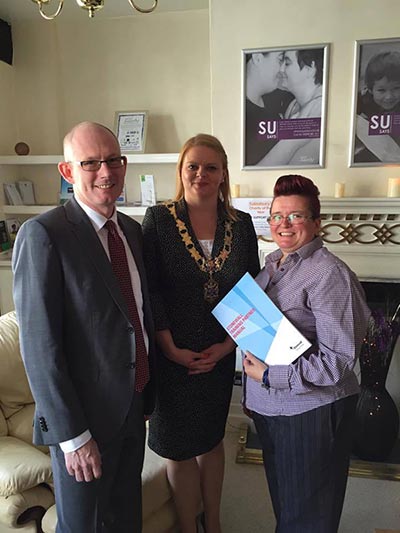 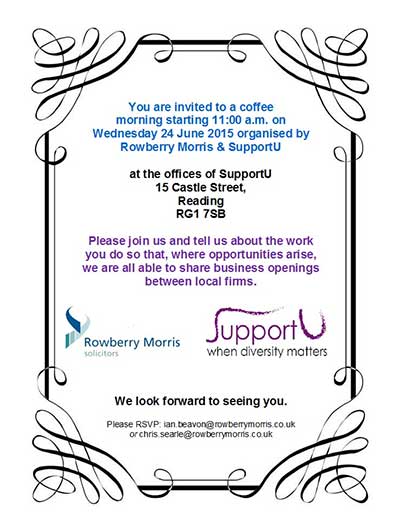 The MidasPlus Duck Races return, once again, to the Staines-upon-Thames Day with the infamous BIG Duck Race and the small duck race starting at the Two Rivers Pub on Church Street on the River Colne and finishing on the River Thames at the Memorial Gardens.

Prize for the BIG Duck Race

Prizes for the small Duck Race

Spring is a very special time at the hospices and children and young people have loved being able to spend more time in our beautiful gardens at Jacksplace. Recent fine weather has meant we've be able to enjoy walks in the local countryside and even take some of our arts and crafts activities outdoors.

Building work for the Caterpillar Appeal is coming along nicely, with walls being plastered and windows and doors now fitted in the new and improved bedrooms and communal spaces. A whopping £3.3 million has now been raised but we still need your help to reach our £4 million target. You can help us by making a donation or taking part in one of our Rainbow Runs. 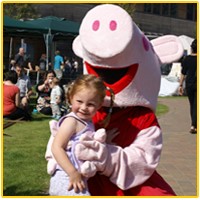 Saturday 12th September is the date for our hospice Summer Fete & Open Day. This is your unique chance to see our brand new Naomi House hospice and tour Jacksplace too.
There we will be plenty of entertainment and games, stalls and a BBQ in the gardens.
We look forward to welcoming you. 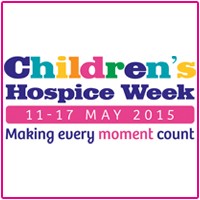 This awareness raising week is dedicated to showcasing the wonderful work that children's hospices do across the UK.
We need your help to share the story of our hospice to as many people as possible, enabling us to reach out to families who may not know that help is available. 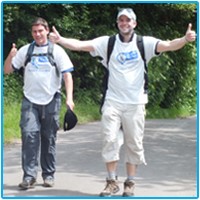 More than 900 people are now signed up to our flagship annual event, but we can still accommodate plenty more!
This year, the marathon distance walk will begin at Salisbury Cathedral and end at Winchester Cathedral. If 26 miles is too far, try our 14 mile route starting at Broughton.

On Friday 27 February 2015, we hosted another fundraising event, with profits this time being sent to the Duchess of Kent House Charity.

A charity coffee morning for local businesses was held​ at The Reading Office and they raised over £300 for Sue Ryder - Duchess of Kent Hospice.  It was a fantastic event and the scones were delicious!  Photo supplied by Reading Chronicle. 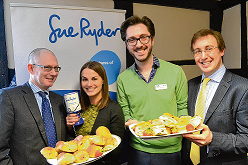 The play, "Deathtrap," is a five character, two act thriller so perfect in its construction that, as Sidney, the main protagonist, says, "A gifted director couldn't even hurt it." Using his penchant for plot, and out of his desperate desire to once again be the toast of Broadway, Sidney, along with Myra, his wife, cook up an almost unthinkable scheme: They'll lure the would-be playwright to the Bruhl home, kill him, and market the sure-fire script as Sidney's own. But shortly after Clifford arrives, it's clear that things are not what they seem! Indeed, even Helga Ten Dorp, a nosey psychic from next door, and Porter Milgram, Sidney's observant attorney, can only speculate where the line between truth and deception lies.

The show is being directed by Tom Shorrock.

A licensed bar will be available throughout the evening to purchase drinks.

Coffee Morning with the Lord Mayor of Reading 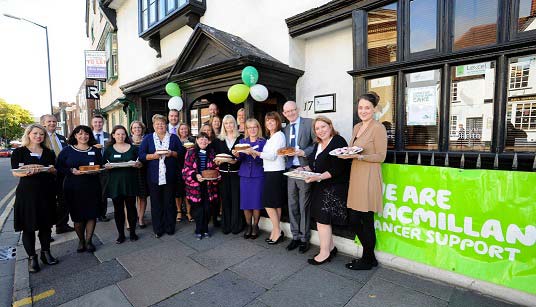 Rowberry Morris Staines Office entered the MidasPlus ‘THE DUCK RACES’ on SUNDAY 29th JUNE 2014.  Our ‘Rowsie’ didn’t win and with the entries from both races, over £6000 was raised. We could not do this without your support! You can see the results and pictures of the winners here.  Well done everyone and thanks to all those who took part. We look forward to next years event. 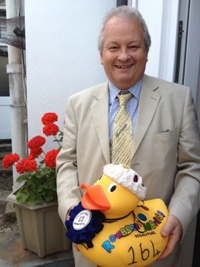 MidasPlus raises and distributes funds to community groups and individuals who have nowhere else to turn.

Since it was first established in 2005 by volunteers, Ray Blowers, Felicity Wylie and Mike Wylie, MidasPlus has distributed more than £100,000 to worthwhile causes

A breakfast seminar took place on Thursday 1 May 2014 at the Hilton Hotel, Drake Way, Reading.

The objective of the seminar was to familiarise you with the new Pensions Act, which provides that UK employers will have a legal duty to enrol most employees into a qualifying pension scheme and contribute towards their retirement.

We partnered with Beaufort Asset Management to bring you a three-dimensional view of the legislation and the steps you need to take to ensure your business is following the correct procedures. There was a light breakfast on arrival, followed by a concise presentation with the opportunity to put questions to the panel of experts. Further tea and coffee was available for those able to stay on after the seminar.

For Your Peace of Mind...

We use a range of cookies to improve your experience of our site. Find out more.